University Lecturer for a Day

Its not often you get the chance to talk about the theory behind what you do but that is exactly the opportunity I had during a lecture to Bristol University MA Television students recently. Knowing something about video production in Bristol, I have, over the years been asked to talk to groups of potential newcomers to the television and video production industry. This group were on a production module, learning about the mechanics of making video films; sorting out the story, finding contributors, looking for locations, preparing shooting scripts, filming and editing – all the things that go to make a film.

The students were in the middle of the Production and Business of Televison unit in their MA and I was asked to talk about the intricacies of working with clients. When producers and directors think about television they might not always think they have a client but in my opinion, they do. In fact, I feel that unless we are making a film purely for our own purposes then we will always have a client and this is a good thing.

The main point of thinking about having a ‘client;’ is that it makes you think about two important aspects of making a film: who your audience is and what is your message? In television that means thinking about what channel you are on and what time your programme might go out. BBC1 is not the same channel as BBC4 and Sky1 has a different audience to Dave. Time also matters because of the watershed. A programme going out at 8:00pm will have a different set of editorial concerns and constraints compared with one going out at 10:00. A few years ago I was one of the producers on an 8 hour landmark documentary series about the human body (The Human Body with Professor Robert Winston), the amount of blood, gore and nudity we had in what was a science series about the biology of the human body was influenced heavily by the watershed.

The message of a film could be the advertising message for a promotional film, the things people need to learn in a training film or the almost existential question for TV; What is your film about? It’s amazing how many times people will set of to make a film and not really know what their film is about and what they are trying to achieve. Just getting pretty pictures in my opinion is not always enough. 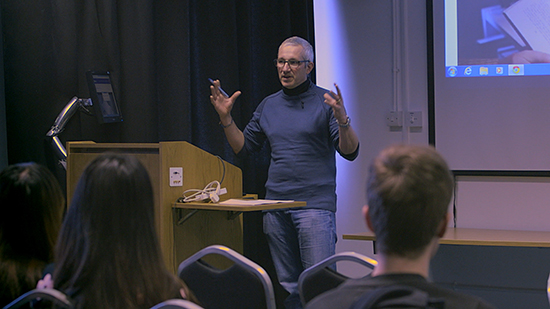 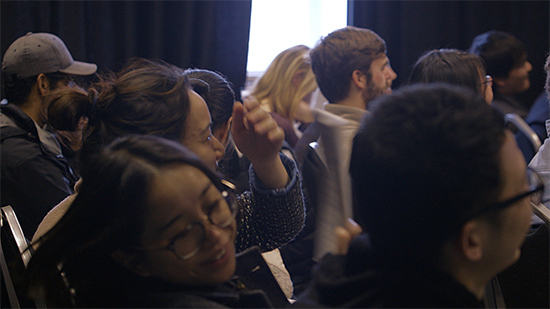 The 30 or so people in the room seemed to take this on board but for me it is not just an intellectual concept. The reason for asking these questions is that it gives you the ability to do your job and most importantly make decisions. Many times in a production ideas will be put forward that are great in themselves but they don’t fit with the brief. Knowing who you are targeting and what you are trying to say means you can make decisions about what not to do. This is vital because it means you can be efficient in terms of time and money and as well as making sure that it does what your client needs it to.

So did I enjoy being a lecturer for a day? Absolutely yes. As the years go by we don’t realise how much we all know about what we do and getting the chance to pass some of it on is just a great thing to do.